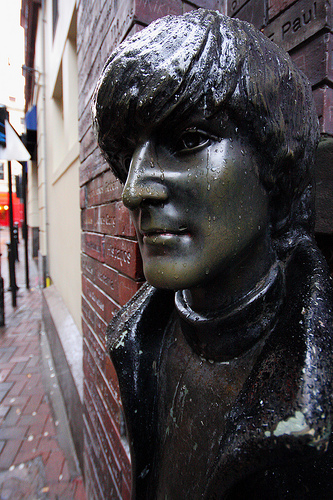 John Winston (Ono) Lennon was born in Liverpool on this day in 1940, son of Alfred and Julia Lennon.  Later, he formed a band called the Quarrymen who played at the local church fete in Woolton, a suburb of Liverpool. Here he met Paul McCartney, who played ‘Twenty-Flight Rock”, tuned John’s guitar for him, and thus began an enduring songwriting relationship ranked among the greatest in the 20th Century!

Later, he auditioned young George Harrison, who played “Raunchy” on the top  deck of a double decker bus. Later still, he met Richard Starkey, AKA Ringo Starr, in Hamburg when John’s group was shipped over there to play for a pittance on the city’s notorious Reeperbahn district.

They called that band ‘the Beatles’.

And by the time he was old enough, and mature enough to come to terms with it, some asshole shot him.

But, what is undiminshed are the songs, both with the Beatles and without.  And here are some of your favourites! Much like my post about Paul McCartney’s most recent birthday, the songs here are presented as chosen by my friends, family, and Delete Bin regulars. This is a compendium of songs by the Witty Beatle most beloved by these same groups of people. But, this time, I’ve also asked a few musicians who I’ve interviewed, or who have otherwise appeared, on the ‘Bin here over the last few months to weigh in.  So, take a look!

♥“Woman” –  It’s an incredible tune. One you recognize right away, and resounds within your soul. Or at least, within mine. 🙂 –  Nancy B

♥“(Just Like) Starting Over” – It’s a moving song about enduring, renewed love, with the added poignancy in hindsight of knowing there would be no starting over for John & Yoko after that. – Leslie Robinson

♥“Imagine” – Imagine is one of my all time favorite songs; its ideas made sense then, now and for always. – Donna W.

♥“In My Life” –For me, it will always be “In My Life”. It’s not Lennon’s most accomplished or ambitious song (“Being For The Benefit of Mr. Kite”, “Strawberry Fields Forever” and “Tomorrow Never Knows” would be those candidates) but, rather like “Imagine”, it’s a very simple, direct lyric that is beautifully stated and undergirded by a lovely melody that will not leave you. The fact that it has a gorgeous George Martin piano solo only makes it sweeter. This song made me fall in love with the Beatles and, decades later, I love it even more. – Graeme Burk, seconded by Gwyn Teatro.

♥“Watching the Wheels”– I love how he is talking about being with his son and not missing any of the hoopla.  Anything off Double Fantasy, really. Love that album.- Andrew Legge

And check out another Delete Bin featured act, interviewed here earlier this year. This is Vancouver singer-songwriter Buckman Coe‘s version of ‘Watching the Wheels’, as well as his own thoughts on this song and what it means to him (just click the ‘Buckman Coe’ link there).

♥ “Baby You’re a Rich Man” – Such a beautiful and crazy cacophony. Always thought it was a great rite of passage song.  – Sarah Loewen

♥ “Happy Xmas (War is Over)” – It’s a message of justice & peace enveloped in hope, beauty.  It’s a loving protest song, with a sense of humour.  So John! Pure John spirit. – Guacira Naves

♥“Twist and Shout” – I myself would probably list my favorite John Lennon tune as one he didn’t write, ‘Twist and Shout’. ‘Twist and Shout’ is an example of this raw rock power; the great beat, the sizzling harmonies, and Lennon’s vocal cord-shredding lead singing are an enduring testament to the best rock band ever, The Beatles.

It’s my belief that if that asshole hadn’t shot him, they would have made at least a few more albums of great stuff.  And what people don’t remember is what an awesome rock powerhouse The Beatles were.  Go watch some youtube stuff of them live, they killed. And that is with primitive gear. – ‘Mr. Zero’ (who requests you in the Mercedes…), guitarist and songwriter with Canadian rock ‘n’ roll greats, The Kings.

♥“Dear Prudence” – This tune gives me a certain special feeling. My dad bought the white album ’cause he thought it was a greatest hits album.  After listening to a couple of sides and hearing #9,  he handed it to me and said he didn’t know what it was. I had just gotten my first stereo so I put it on… and kept putting it on; so wild and beautiful.

A song like “Dear Prudence” would be great if it was just sung with an acoustic guitar, the melody is so strong.  But when you listen to all the riffs and textures underneath it’s a real work of art.  I love the tune! – Paul Emery, lead singer and songwriter with Toronto power-pop band The Dickens.

♥“#9 Dream” – There are probably better Lennon songs, but this is my favourite. There is something woozy and otherworldly in the production here, and the lead guitar part at the start is snake-like. ‘Walls and Bridges’ was my first solo Lennon album and this is the highlight. Lennon at his melodic, magical best. He is missed. – British singer-songwriter Molony

There are many Lennon solo works I love, but the one I always return to is “#9 Dream.” As the name suggests, the song transports the listener to an ethereal place, both lyrically and musically. The mood is set with swirling strings and a slide guitar, and is lead by Lennon’s soft, wistful vocal. He reminisces about a romance “so long ago; was it in a dream?” and “two spirits dancing so strange.” The chorus of “Ah! böwakawa poussé, poussé” (helped by May Pang’s sweet vocals) came to Lennon, appropriately enough, in a dream. The choruses end as if falling into a dreamy slumber: the strings simultaneously ascend and descend, slowing very gradually until they rest on one long, sustained note.

♥ “Help!” – I found it really tough to choose one stand-out from Lennon’s canon; let’s face it, there’s a hell of a lot of cream from the Brandy Alexander king [ed: only a hardcore Lennon geek will get this – nice.]. So I’m going personal. “Help!” was probably the first pop-song I really got into, after seeing the enjoyably silly Beatles film on TV as a kid.

The giddily infectious back-and-forth vocal harmonies aren’t attributable solely to Lennon, but the character of wistful exuberance in his writing is pretty unique. It’s an amazing two-minute confection, an eminently hummable ditty of anguish and redemption. There are many greater, deeper songs down the road, but it’s verve and concision make “Help!” a fine starting place. – Luke Sneyd, singer/guitarist with rock-pop band Charge of the Light Brigade.