Here’s a clip of indie-blues rock two-piece champeens The Black Keys.  It’s their song “Your Touch” as taken from their 2006 record Magic Potion.  Warning: This clip involves a lot of gun play, murder, ghosts, unabashed lip synching, and not a bass player in sight, good people.  This is the blues as it was meant to be , haunted by the spirits of Hound Dog Taylor, also a bass aversonist of some renown, and of course Junior Kimbrough, a man who the ‘Keys covered heavily in their earlier career.  Yet, this isn’t exactly blues, is it? 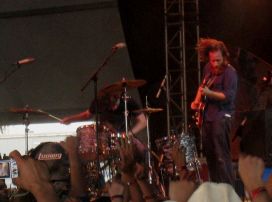 One thing about the Black Keys – Dan Auerbach on vocals and guitar, and Patrick Carney on drums –  is that even if it’s hard to deny that they’re playing music that is heavily indebted to the blues, they are positioning the blues not so much as roots music interpreted by an indie band so much as a framework for another kind of modern indie guitar rock. In the Black Keys world, if rock music is the baby sired by the blues, than the sire still has something to teach the mouthy little brat after all.

The skill it takes to pull off that stylistic inversion is not to be compared, even if the knee jerk reaction is to draw a parallel with the White Stripes.

What ‘s evident here is pure range, despite the deceptive simplicity of a tune so downright primal. This song is a love song, or maybe a lust song, which could be positioned along any point in the pop music spectrum. Besides the fiendishly sexy riff, the crunchy guitar, the willfully scrappy drumming, and the soulful vocals, it’s really the pop appeal of the song which really makes it sing.  And of course, there’s this video, full of cartoon violence, and ironic humour.

But, I’d hesitate to call the Black Keys a blues band in the traditional sense of the term.  There’s too much else going on, even on this mid-period cut, before the duo expanded their sound upon later releases. Again, this is because this song, and the output of this band as a whole, is soaked in primeval blues but escapes the generalizations of that genre, a feat that can only be credited to how good these guys are at writing songs.  This is true whether they’re working with Ike Turner, or Danger Mouse. Both of these men, arguably representing both ends of a lifetime of rock n roll as we know it,  contributed to the record that came after Magic Potion –  2008’s Attack & Release, which made any comparisons to the Stripes a thing of the past.

For more information about the band, check out the Black Keys Official Website.

And do  yourself a favor and ‘like’ the Black Keys on Facebook, with frequent updates about tours, releases, and even promotional artwork.