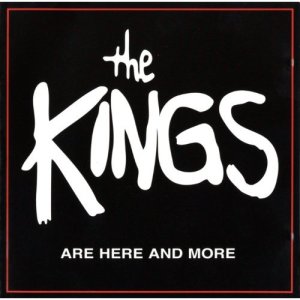 Listen to this track by Canadian pub rockers and exuberant and unabashed one-hit wonders, the Kings, originating from two towns close to my heart; Vancouver B.C (where I work now) and Oakville Ontario (where I grew up).  It’s their giant 1980 radio hit “This Beat Goes On/Switching to Glide”, a sort of two-fer rock n’ roll suite that kept them on the Billboard charts for six months, and led to an appearance on Dick Clark’s American Bandstand TV show.  The song is taken from their debut record The Kings Are Here.

The song, and the record off of which it comes, was produced by Pink Floyd and Peter Gabriel collaborator Bob Ezrin.  When they entered a Toronto recording studio, he heard them and decided to produce them from scratch in Los Angeles.

But, rather unlike the Floyd and Gabriel, The Kings were a meat and potatoes rock ‘n’ roll band, and a hard-touring one at that.  And it’s this emphasis on live playing that really comes through on this track (or really two twinned tracks), a series of snapshots of late night rock ‘n’ roll shows and appreciative audiences.  This is not to say that Ezrin was out of his element.  Remember, Ezrin produced another meat and potatoes band; Alice Cooper, more specifically their 1973 breakthrough album Million Dollar Babies.  And for the Kings, working with Ezrin was a dream come true to a young and hungry touring band.

But as far as “This Beat Goes On/Switching to Glide” is concerned, where it stands out for me is the transition between one section of the song and the next, creating a rock song that is instantly accessible with miles of pop appeal, along with being ambitious on the arrangement front that is bolstered by solid musicianship.  In short, the Kings were pub rock.  And when new wave came along, and was embraced by top forty radio at the end of the 1970s, the Kings were ripe for radio play, first in Canada and eventually in the States, too.

And in listening to it, who can deny its irrepressible charm?  But, the idea to meld the two sections was a studio creation, even if its written and played by a band who’s main strength was in stage presentation more so than in their expertise as record-makers.  From The Kings official website:

That is what happened with This Beat Goes On. It was a simpler chord structure that was not as hooky with lyrics that were not as direct. [lead singer and bassist] David Diamond understood what Ezrin was getting at regarding the chords and went and changed the parts so that although more complicated musically, it sounded better and was way more catchy. That is when [guitarist and band songwriter Mr.] Zero re-wrote the lyrics to the B-verse which is where all this improvement was taking place so instead of the original “Lots of dusty mentals can be blown at any time…” we now have “I have lots of friends that I can ding at any time…” It’s pretty obvious which is better and there was more than just that example … In The Kings minds This Beat and Switchin’ were always supposed to be together as a segue. They were not too happy when Elektra Records decided to release Switchin’ on its own. It did get some play but finally after pressure from the band the segue was released and it was only then that radio really picked up on it.

Bob Ezrin stayed with them for a second album, even if it never replicated the success of “This Beat Goes On/Switching To Glide”.  The Kings took their drive for live rock ‘n’ roll into the Twenty-First Century, currently touring and celebrating their history.

For more information, make sure and visit the Kings’ official site.

[UPDATE: July 16, 2017 – Check out this video that has Zero and Dave Diamond talking about how this song came about.]