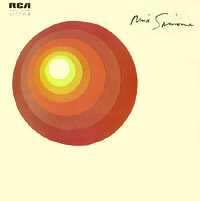 Listen to this song by the High Priestess of Soul herself.  It’s a cover version of George Harrison’s “Here Comes the Sun” by the incomparable Nina Simone as taken from her LP of the same name, 1971’s  Here Comes the Sun.  Today is Harrison’s birthday. He would have been 67 had he not succumbed to lung cancer in 2001  But, he left behind this song, certainly one of my favourites of all time.

Toward the end of the 60s, there was a lot of pressure on jazz vocalists to become more contemporary, to catch up with the times. Some were less successful with the critics than others on this score.  For instance, Ella Fitzgerald’s take on Cream’s ‘Sunshine of Your Love’ was jarring to both rock critics and, certainly, jazz critics too.  Rock and pop music as approached by jazz musicians at the time were often odd bedfellows.

But listen to Simone’s lightness of touch here. The great thing about her take on this is that she barely touches the ground vocally. It’s a pop record, but Simone’s jazz influences make this really special, and not only because of her crystalline and intricate piano lines.  It’s her voice, a sandpapery whisper, effortless, and using the words to the song like an angel uses a skyful of clouds, leaping from one to another, light as air.   Also, the arrangement is lush, with backing vocalists and strings drifting in and out. But where this might have been overblown in the hands of another artist, somehow this song is spacious as well as being lush. Magic.

And getting back to the stylistic chasm between the immediacy of rock music and the improvisational landscapes presented by jazz, I think what a jazz approach brings to pop songs originally written in a rock vein like this one is the power of subtlety, of interpretation.  If immediacy is the province of the rock songwriter, than the intricacies to be found in between, the aural treasures that are waiting to be found, are what artists of Simone’s calibre bring outside of the rock idiom.

That touch of sadness, the blueish tones to be found in the golden warmth and sunshiny glow of Harrison’s original is what really makes this special for me. Where Harrison’s tune is about a sudden feeling of freedom (and playing hooky from Apple Corp, while hanging out in friend Eric Clapton’s garden), Simone’s version is the sound of someone emerging from a real trial, a sorely dark time, with the first rays of hope finally being seen.

And no matter what motivated Simone’s interpretation, whether deliberate or entirely visceral, she delivers a facet of this song that brings out just how great a songwriter Harrison was while she’s doing it. And that is the mark of a first tier artist in any stylistic field.

For more information about  Nina Simone, check out the Nina Simone Official Website.