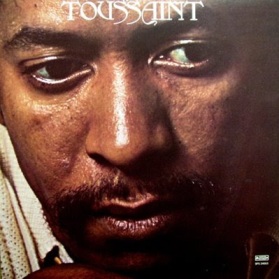 Listen to this track by a member of New Orleans royalty,  singer, songwriter, producer, piano player, arranger, and all-around cool customer Allen Toussaint.  It’s ‘Sweet Touch of Love’, a supremely joyous slice of funky R&B from Down South as taken from his 1970 sophomore LP From A Whisper to A Scream. You might recognize this song from the recent Axe deodorant TV commercial.

Before putting out albums under his own name, Toussaint was a mover and shaker in the crafting of the New Orleans soul sound  starting in the 1960s, with hits by Irma Thomas, Ernie K-Doe, The Neville Brothers, and Lee Dorsey, among many others.  Among many others, his song ‘Fortune Teller’, was widely covered by non-New Orleans acts from the Rolling Stones, to the Who,  to Robert Plant & Alison Krauss.  He also wrote ‘Pain in My Heart’ under his pen name Naomi Neville, a tune made famous by Otis Redding.

Toussaint was a force to be reckoned with as a writer, but also as a bandleader.  He surrounded himself with players like Mac Rebennack (AKA Dr. John), and singers Merry Clayton and Venetta Fields, both of whom were to become highly sought after as backing singers to rock bands.  Allen Toussaint himself would work with the Band on their live Rock of Ages shows, arranging the horn parts that make that recording such a standout.

His work with the Meters was instrumental in the development of New Orleans funk.  Writing of crossover hit ‘Southern Nights’, a big success for Glen Campbell by the mid-70s, and producing Patti Labelle’s ‘Lady Marmalade’ around the same time showed Toussaint’s range, and really underscores his understanding of how various traditions in American music often are best showcased when they intertwine.

This is really only a fraction of Toussaint’s activities.  You might think that he wouldn’t have time for a solo career.  Yet, listening to this track which just bounces with sexiness and positivity, you can tell he focused all of his considerable skills on it.  Toussaint’s lead vocal is as cool as a cucumber, with his barrelhouse piano providing a second voice in counterpoint.  And I love the backing vocals that root this tune into a gospel tradition, even as the rhythm section funks it up into a frenzy, and brings a wonderful stylistic tension to it.

Toussaint’s influence would go beyond his own mastery of R&B, pop, and funk, when his material began to be sampled by the 90s.  His link to New Orleans is indisputable both musically, and as a member of the community.   When the area was ravaged by Hurricane Katrina in 2005, Toussaint weathered the storm while still in the city, leaving for New York City and settling there, only until his house is rebuilt. Apparently, it takes more than a deadly weather system to break Toussaint, a musical and cultural force of nature if there ever was one.

For more information, check out AllenTousaint.com