Listen to this track by Velvet Underground disciples and post-punk pin-up nerds from New Jersey, the Feelies.  It’s ‘Crazy Rhythms’, the title track from their 1980 debut album of the same name.  Much like Television a few years before them, the Feelies put out a debut album featuring a sound that straddled both the emerging camps of punk rock, and in classic pop guitar, influencing a generation of bands who came after them. 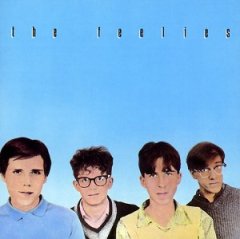 The Feelies emerged out of the New York punk scene in the mid-70s, haling from Jersey, and quickly garnering a following and critical praise from the Village Voice who championed them.  The band managed to pull together 60s influences like the Velvets, but also the Beatles (the band cover ‘Everybody’s Got Something To Hide Except For Me and My Monkey’ on this very album), writing songs that take their time, not rushing toward big musical ‘events’.  Yet, at the same time, the hooks are there, keeping your attention as much as any traditional pop song.

What strikes me most about this track is that it is both languid and nervy at the same time.  This band’s sound springs from the Velvets, particularly with lead singer Glenn Mercer’s clear Lou Reed-isms and the band’s propensity to stretch out on single chords.  There’s also a sense of scale here, even if the structure of the song is built on some pretty basic elements.  I think this may be the reason that the song works so well, and holds attention through out the instrumental passages, and maybe particularly in those passages.

The interlocking, jangly guitars and the build up of a drone aren’t new ideas in rock music. But, the Feelies presented them in an 80s context, paving the way for admirers from REM to Stereolab to popularize them for a new generation of indie bands.