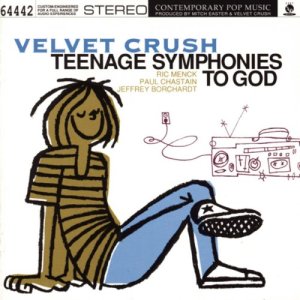 Listen to this track by unabashed power pop champions Velvet Crush.  It’s “Hold Me up”, a Beatles-meets-Stones styled anthem as taken from the  1994 album Teenage Symphonies To God, the title of which is inspired by Brian Wilson’s famous statement about his own work, the legendary SMiLE album. How’s that for a 60’s-inspired hat trick?

In the late 80s, while the Posies were planning their power pop assault on the West Coast, Velvet Crush were staging their own campaign in the east, Rhode Island to be precise, and influenced by the same forefathers of the genre in Big Star, the Raspberries, and with a bit of  Rick Nielson Cheap Trick guitar thrown in.

Velvet Crush is co-led by bassist/vocalist Paul Chastain and drummer Ric Menck.   TStG was their second album, and produced by Let’s Active linchpin (and early REM producer) Mitch Easter, who knows something about pop hooks and crunchy guitars.

Matthew Sweet had produced their first album, and so clearly these guys knew that they wanted that classic power pop sound from the get-go.  By the mid-90s, this was becoming a popular route in Britain (the Boo Radleys, Teenage Fanclub), and Velvet Crush soon found themselves on Creation Records in the UK, labelmates to Oasis, while on the Sony label in North America.  The band never reached the heights of the Gallagher crowd.  Yet, on this record and with this song, they continued in the traditions of guitar pop during a time that had nearly forgotten it.

The band continued to do the same into our present decade, releasing the Stereo Blues album in 2004.