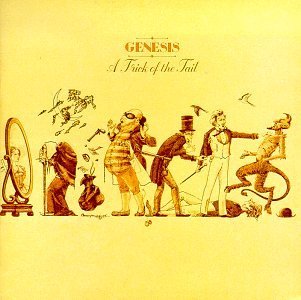 Listen to this song by a post-Peter Gabriel, Genesis.  It’s ‘Entangled’, the second track from the 1976 album Trick of the Tail

, on which a supremely gifted drummer becomes lead singer upon the departure of a charismatic frontman.   Such a turn of events in the life of a band of this stature is usually considered the beginning of the end.  Yet in this case, it turned out to be more like the end of the beginning where international popularity is concerned.

On Gabriel’s departure from Genesis in May of 1975, the reality of the situation came to light for the remaining four members – drummer Phil Collins, bassist Mike Rutherford, keyboardist Tony Banks, and guitarist Steve Hackett.  The New Musical Express and other music papers of the time called the band’s future into question, and fans were understandably concerned. It seemed prudent to look for a replacement lead singer immediately.  In the meantime, the instrumental tracks of this album were being recorded.

Collins was the most involved in coaching prospective lead vocalists on the band’s material.  After all, Collins had provided backing vocals, and occasional leads, since he joined the band in 1971.  He knew the cues.  And eventually, it was decided that Collins was the man for full-time lead vocals, even if Collins was initially reticent to be anything other than a drummer. 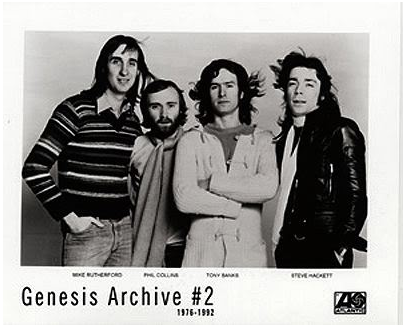 And the result was this album, released in February 1976.  As this pristine, beautifully layered song ‘Entangled’ reveals, the album was something of a return to their early 70s sound, and a little less angular and psychologically knotty than the previous, Gabriel-led The Lamb Lies Down on Broadway.   So, where the prog-rock strain of the band is still in place here, in some ways this record, and this song, was a kick-off to new era of pop accessibility.

The approach served them well during this time of transition. This album scored them the highest chart placements than they’d ever enjoyed before, with a number 3 in the UK, and a number 31 in North America.  With a popular frontman gone, and with a new lead voice in place, Genesis had beaten the odds and then some.

The four-piece incarnation of the band would see them through another album, Wind & Wuthering, and a two-disc live album in Seconds Out

, which featured Yes/King Crimson drummer Bill Bruford helping out on drums with Collins singing out front.  Chester Thompson would perform a similar role on subsequent tours for decades to come, although Collins would continue as drummer as well as singer, both on tour and in the studio.

After the release of the live album, guitarist Steve Hackett would also leave the band to  pursue a solo career full time.  Hackett recorded a solo record before his departure, Voyage of the Acolyte, which featured, among other musicians, Phil Collins and Mike Rutherford, and is often thought of as something of a lost Genesis album.  But, by all accounts Hackett’s share in recorded material on the Wind & Wuthering was less than he was comfortable with.  The freedom of a solo career seemed the obvious choice for him.

The band would not replace him, officially.  Much like the way Collins filled in for Peter Gabriel, bassist Mike Rutherford would double on guitar in the studio, and work with guitarist  in Daryl Stuermer in live appearances, joining Chester Thompson as a long-term touring musician.  The next album by 1978, … And Then There Were Three, was aptly named.  And the out and out pop song “Follow You, Follow Me” would mark yet another career trajectory; multi-million selling top 40 chart success as a trio.

[UPDATE: March 13, 2018 – here’s an article that goes into even more detail on how Phil Collins transitioned into the lead singer of the band – reluctantly, and gradually over the course of rehearsals for this very album!]