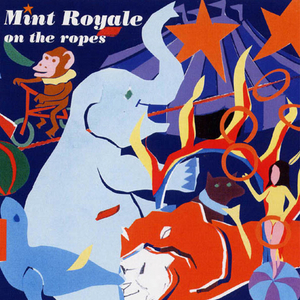 Listen to this track by British dance outfit Mint Royale along with Sunderland-born DJ, TV presenter, and former frontwoman for punk-poppers Kenickie, Lauren Laverne.  The song is taken from the group’s 2001 album On the Ropes

This song was a big hit in England, all over the radio during the last summer I spent there.  Therefore, it holds something of a special place in my heart.  And what  a song it is; just a burst of youthful vigour and the optimism of young love that makes it a classic slice of summery pop.  One of the things that makes it is how strongly Laverne’s perkiness shines through, and as such it has miles and miles of personality along with being highly danceable.

As mentioned, Laverne had made a name for herself as the lead singer and guitarist of the mostly-girl punk pop band Kenickie who had a few hits in the end of the 90s, including ‘Punka’ and the irresistible ‘In Your Car’, It was clear that even though the band was short-lived, it wasn’t for lack of charm.  Laverne and her cohorts had that in spades.  And it’s the charm she exudes which really makes this song shine.

More recently, Laverne has secured a gig as a TV and radio presenter, known for a quirky and ironic style.   Among many shows, she’s presented coverage of the Glastonbury festival, the NME awards, and the British Saturday morning pop show CD:UK, and the London XFM breakfast show .

With those lucrative gigs in broadcasting, it’s unlikely that she’ll continue to develop a solo career  as a pop singer; kind of a shame for those of us who don’t live in Britain, and who (like me) find her to be a breezy, and unaffected pop singer in an age where personality and pop couldn’t be farther apart.