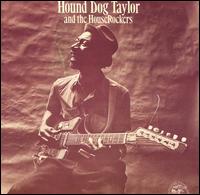 Listen to this song by late-blooming bluesman and slide guitar-slinger Hound Dog Taylor.  It’s the oddly titled ‘Give Me Back My Wig’ as taken from Hound Dog’s 1970 debut Hound Dog Taylor and the Houserockers

on the label that was created in order to put it out; the now-legendary Chigago-based Alligator Records.

Hound Dog Taylor (neé Theodore Roosevelt Taylor, no less) was born in 1915 Mississippi, with a presidential moniker and six fingers on his left hand. His first record was put out in 1970, making him something of an undiscovered treasure when it comes to electric blues. He clearly draws from Elmore James, both in his vocal delivery and in his scrappy slide playing.  Yet, his onstage energy and personality quickly gained him a following of his own.

Hound Dog moved to Chicago in 1942, where he made a name for himself as a club act.  His command of the blues allowed him to make a few singles in the 50s and 60s, plus a few radio appearances.  But, by 1970, Hound Dog was able to connect with the electric blues festival circuits and revival package tours that had helped folk-blues artists a few years before. In some ways, the timing was just right for him.

This tune in particular was one of his best-known numbers, and is something of a meat-and-potatoes 12-bar blues which is more than the sum of its parts because of Taylor’s personality which shines through.  This is not to mention the tough-as-nails backing courtesy of the Houserockers, notable for supporting Hound Dog’s slide by means of only a second guitar and a drum kit. Jon Spencer, eat your heart out.

Hound Dog was also known for his use of cheap guitars, and an almost punk rock approach to the blues, with minimalist arranging and limited soloing.  To me, it’s kind of ironic that his debut album was the flagship record for the birth of Alligator records, which to my ears have taken to building a catalogue of slickly produced contemporary blues and one dimensional blues-rock that is a little light on personality.

At the time of his death from lung cancer in 1975, Hound Dog was actively touring, yet having only released his third LP, the live document Beware of the Dog in 1973.  A fourth was released in the early 80s, by which time he’d become the inspiration to many a young blues fan including one George Thorogood of “Bad to the Bone” fame.