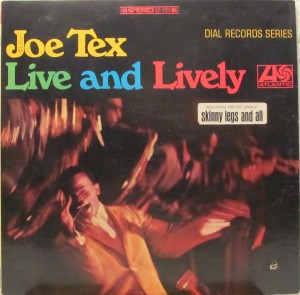 Listen to this track from soul-singing huckster Joe Tex. It’s “Skinny Legs and All”, with this particular version of the song on the album Live and Lively

Some soul singers were smooth talking love men like Sam Cooke, while others were wilder like Wilson Pickett.  All of them, however, owed the church a tremendous debt in terms of showmanship, providing them with a template as to how to relate to an audience in terms of presentation.  None is more indebted then Joe Tex, who is the testifyin’ preacher on this track.  Notice how this song directly engages the audience, how there is a call-an-response musically, but also between the performers and the crowd.

And what is this other than a sermon about how treasuring someone despite their shortcomings? And perhaps too it unveils something of how cultural expectations are not nearly as big as the shot of love when it strikes.  Of course with that you get that joyous and rough-shod Southern soul sound, with the stabbing horns, the feral rhythm guitar, and of course Tex’s own sandpaper-tenor voice lifting the whole thing to the stars.

Joe Tex would run with the giants of soul, yet never reach the same career highs, possibly because his style was so deeply entrenched in the gospel traditions and all of the idiosyncrasies that go along with them.  Tex would ‘preach’ and clown around in equal measure on many of his 60s cuts.  And by the 70s he would branch out into funk, and eventually to disco with a novelty hit ‘Ain’t Gonna Bump No More (With No Big Fat Woman)’ which may have undercut his mark as a serious artist.

Unfortunately, he died young at the age of 49 in 1982.  But what he was able to do during a relatively short career was to take the heart of soul music and have some fun with his audience at the same time.  While perhaps not an innovator, he was certainly a consummate entertainer, the clown prince of soul music.

One thought on “Joe Tex Sings “Skinny Legs and All””