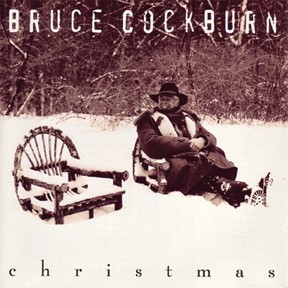 Listen to this song by superlative singer-songwriter-guitarist and major Christmas fan Bruce Cockburn. It’s  “Riu Riu Chiu”, as taken from his album Christmas

.  The song is sung in an archaic form of Spanish, telling the tale of an Almighty being who creates a woman, who then creates him in return.  Hmm.  That sounds kind of familiar.

Bruce Cockburn released his Christmas record in 1993, and even though I’m a big fan, when I heard about it I thought the worst.  I imagined folk-pop versions of  “Up on the House Top” and a cover with Cockburn in a sweater, basically.  Well, I needn’t have worried.  Cockburn had been planning this record since the early ’70s, the beginning of his career in fact.  He had loved Christmas music, more to the point the more spiritually oriented material, since childhood.  His dad had given him a homemade booklet of Christmas songs while he was a child.  He’d kept the booklet of course, which served as the album’s basis.

The record is no seasonal knock-off, and it’s clear that Cockburn threw himself into it.  As mentioned, this song is sung in Old Spanish.  But other songs are sung in Latin, French, and even in the Huron language, on which an expert, John Steckly, was consulted on phrasing and pronunciation.   A project like this might come off as kind of pretentious in the hands of a lesser talent, it seems to me.  Yet, what comes through is Cockburn’s enthusiasm for delivering music he’s clearly in love with.  He was clearly committed to it, and I’d argue that it is one of his best efforts overall.

There is a wintry, organic atmosphere to the record as a whole, and to “Riu Riu Chiu” in particular.  The song  is traditionally sung acapella. But, Cockburn uses a repeated descending guitar riff in tandem with Hugh Marsh’s violin lines, which really pushes it along without being intrusive. So, he’s added his own imprint to it, as well as presenting an old tale in the truest sense of the folk song tradition.  It comes off as reverent, but also kind of spooky too.  And strangely, there is an impulse to move to it, just because it’s so rhythmic.

Who ever thought an ancient tale of the Christmas story sung in archaic Spanish would be so funky?