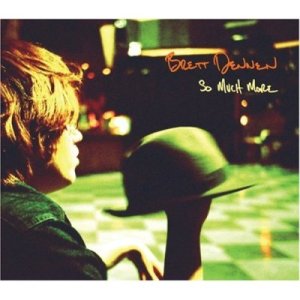 Here’s a clip of cherubically-voiced singer-songwriter Brett Dennen with his 2006 song “There Is So Much More”, the near title track to his album  So Much More

Here it is, folks. I like quirky singers, ones that don’t sound like anything or anyone other than themselves. I like songs about the nature of life, and about the ambient angst that many people feel  toward what this thing is about, this life,  whatever it is.  And I love songwriters who aren’t trying to pull a fast one, who aren’t trying to weave a spell, but rather reveal what their brains are conceiving naturally, as if you’re walking along with them and thinking their thoughts, unselfconscious about how those thoughts come off.

Brett Dennen seems to embody all of those principles, with his androgynous voice and his natural feel for presenting language and ideas without sounding as if he’s trying to be clever about it – a common trap in the world of folk-rock singer songwriters.  And this song is my favourite so far, an anthem to everyone who has on occasion wondered about the randomness of life, the thought that some are born into hardship while others are spared it, and that death can intrude so easily into the lives of either without warning.

These are powerful ideas not to be handled lightly.  In writing a song like this, it would be easy to get maudlin, or depressing, or reveal yourself to be trying too hard, simply because it would take a hard try to pull a song like this off without sounding like a pale parody of sensitive singer-songwriters. But, Dennen makes this as real as it gets in the mind of someone who struggles to figure out what it all means, and admits that the answer is an impossible height to scale even if it’s one that calls to us to make the attempt.  But in this song, he does what a good artist always does; he has reverence for his subject matter, and respect for the listener in his honesty. As such, it comes off easily, and powerfully.

I shall be following this guy’s work more closely. You can do the same by checking in to brettdennen.net.