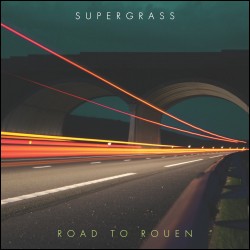 album, “Tales of Endurance pts 4, 5, & 6”. This clip is from a live show from Brazil, framing this song and the band themselves as a cross-section of all the best in British rock music from the 60s to the present day.

Supergrass debuted in 1995 with their just-in-time-for-Brit-pop album I Should Coco, which featured the hits “Caught By The Fuzz” and the effervescent “Alright”, the video for which caught the attention of one Steven Speilberg, who was interested in basing a TV show around Supergrass, not unlike a kind of 90s Monkees.  The creation of a follow up album however took precedence, and the band turned Speilberg down.

It’s hard to imagine how their career would have gone if they’d decided to accept Speilberg’s offer.  But, it’s even harder to imagine life without the follow up, ironically titled We’re In It For The Money, which is arguably the best album of their impressive list of good records.  Where that record certainly has some undeniable tracks, many of their follow-up albums do as well. From their debut, they managed to mature from cheeky chappies to creating work with a bit more depth. A dynamic live act, Supergrass were a trio for many years, with unofficial contributor Rob Coombes adding keyboards.  By Road to Rouen, Rob was in the band along with guitarist/frontman brother Gaz Coombes, bassist Mickey Quinn, and drummer Danny Goffey.

I really think this record is one of their best, slightly moody, and very ambitiously arranged.   This song kicks things off well, building the track from an acoustic guitar strum to a full-on rock out barrage.  At  just over 35 minutes, it never outstays its welcome, which is endemic of a lot of good albums these days which would otherwise by great albums.

Supergrass have a knack for being both a singles band, and an albums band, which is no small feat, appealing to casual music fans, and serious geeks like me in different, yet equal, ways.  And as mentioned, they have the balance to be able to incorporate a list of influences from the annals of British classic rock music – Marc Bolan, the Stones, the Small Faces, The Kinks – while still establishing their own identity, which may be an even harder feat.

For more music and news, check out the Supergrass MySpace page.