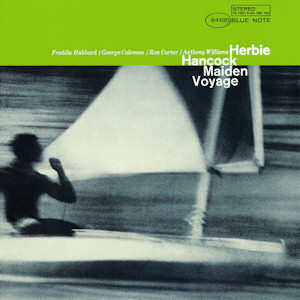 By the mid-60s, rock music was changing with the British invasion, Motown, the R&B boom in London, and Bob Dylan going electric. But, jazz was changing too just as it had in the 40s with bebop, drifting away from speed of sound soloing which was established in bebop at that time into a more leisurely space , allowing soloists to ‘stretch out‘ in kind. But, some of the best examples of this new trend in jazz concentrated as much on melody and lyricism as it did on personal expression. This track is a great example of this, with many different melodies revealing themselves in the solos, some of which are only truly revealed on the second or third listen. That’s the great thing about jazz from this era – it keeps on giving.

The personnel on the track is Hancock himself on piano, holding down the syncopated rhythm which is the engine of the piece. Freddie Hubbard is on trumpet, while fellow Miles Davis alumnus George Coleman plays tenor saxophone. The rhythm section is the ever-present Ron Carter on bass and Tony Williams on drums.

Listening to this, it’s hard to believe that this music came out the same year as Sonny & Cher. This is not to knock “I Got You Babe”, but the point is that this music sounds as though it’s from another world entirely, streets ahead of what was happening in the pop charts. Later, rock music and jazz would dovetail into fusion, brought about largely by Hancock and Coleman’s former bandleader Miles Davis. Hancock himself would align his sound with funk, and collaborate with non-jazz artists like Stevie Wonder and Joni Mitchell, to name a few. He would even branch out into hip hop and electro in the early 80s. Yet, in this brief period between cool jazz, ‘The New Thing‘, and fusion, jazz seemed to exist on a plane of its own, neither threatened nor overshadowed by what was happening in the pop world.

Maiden Voyage was an important track and an important record in my own pursuits in learning about how rich jazz is. It taught my ear to appreciate subtlety, patience, and the value of musical tension. Where pop is immediate, a sugar rush, jazz takes its time, doesn’t spoon feed it to you, but let’s you discover the nuances of its flavours for yourself.