Yesterday, I was once again aware of a phenomenon that a friend of mine once described as “Jungian Radio”, an avenue to the collective unconscious. This is a fancy name for a song that pops into your head for no apparent reason and stays there for a long enough period of time to make it notable. Sometimes, it’s welcome and sometimes it’s not. But, I thought I’d write about a few of the welcome ones. And this is the first in a possible series.

‘Jolie Louise’ by Daniel Lanios, from the album Acadie.

I always liked this one, for a number of reasons. First, its another story-song, which is a weakness of mine. Second, it sounds like a Acadian folk song and it isn’t; Lanois wrote it, and he’s from Hamilton, Ontario. Third, it’s not of its time in that there’s nothing late 80s about it. I like songs that are written without a date stamp on them. Fourth, this tune is about as far from Lanois’ style as a producer as you can get, the flavours of which are on Lanois-produced albums like Peter Gabriel’s So, U2’s The Joshua Tree, Bob Dylan’s Oh Mercy, and Emmylou Harris’ Wrecking ball, among others.

His production style is distinctive – lots of echo, tremolo, and ambient tones. This atmosphere is evident on Acadie as a whole, but not on this little song, which is like a little oasis of simplicity in the middle of some very slick production on the rest of the record. There are light touches of gentle electric guitar, brushes on snare, and Cajun/Acadian accordion. Lanois was based in New Orleans for a long time, which may have inspired the sound. The song is basically folk tune about a working class guy who loses everything when he takes to the drink. The tale is told to a gentle, jaunty singalong melody, yet is infused with pathos too. It’s one of the happiest sad songs I can think of.

To view the clip, hover over the image and click the ‘play’ icon. To enlarge the viewing window, click the magnifying glass icon in the top right hand corner. Enjoy! 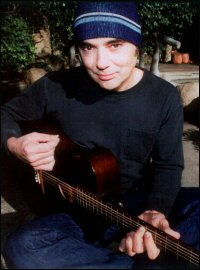 4 thoughts on “The Song In My Head Today: ‘Jolie Louise’ by Daniel Lanois”